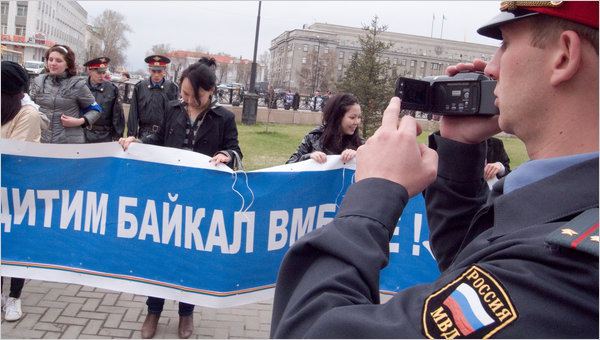 Baikal Environmental Wave protested in June against a paper factory on the shores of Lake Baikal, months after security forces seized its computers.

Graphic Raids in the Name of Microsoft

Life in a Siberian Factory Town

The group, Baikal Environmental Wave, was organizing protests against Prime Minister Vladimir V. Putin’s decision to reopen a paper factory that had polluted nearby Lake Baikal, a natural wonder that by some estimates holds 20 percent of the world’s fresh water.

Instead, the group fell victim to one of the authorities’ newest tactics for quelling dissent: confiscating computers under the pretext of searching for pirated Microsoft software.

Across Russia, the security services have carried out dozens of similar raids against outspoken advocacy groups or opposition newspapers in recent years. Security officials say the inquiries reflect their concern about software piracy, which is rampant in Russia. Yet they rarely if ever carry out raids against advocacy groups or news organizations that back the government.

As the ploy grows common, the authorities are receiving key assistance from an unexpected partner: Microsoft itself. In politically tinged inquiries across Russia, lawyers retained by Microsoft have staunchly backed the police.

Interviews and a review of law enforcement documents show that in recent cases, Microsoft lawyers made statements describing the company as a victim and arguing that criminal charges should be pursued.

The lawyers rebuffed pleas by accused journalists and advocacy groups, including Baikal Wave, to refrain from working with the authorities. Baikal Wave, in fact, said it had purchased and installed legal Microsoft software specifically to deny the authorities an excuse to raid them. The group later asked Microsoft for help in fending off the police. “Microsoft did not want to help us, which would have been the right thing to do,” said Marina Rikhvanova, a Baikal Environmental Wave co-chairwoman and one of Russia’s best-known environmentalists. “They said these issues had to be handled by the security services.”

Microsoft executives in Moscow and at the company’s headquarters in Redmond, Wash., asserted that they did not initiate the inquiries and that they took part in them only because they were required to do so under Russian law.

After The New York Times presented its reporting to senior Microsoft officials, the company responded that it planned to tighten its oversight of its legal affairs in Russia. Human rights organizations in Russia have been pressing Microsoft to do so for months. The Moscow Helsinki Group sent a letter to Microsoft this year saying that the company was complicit in “the persecution of civil society activists.”

Microsoft, like many American technology giants doing business in authoritarian countries, is often faced with ethical choices over government directives to help suppress dissent. In China, Microsoft has complied with censorship rules in operating its Web search service, preventing Chinese users from easily accessing banned information. Its archrival Google stopped following censorship regulations there, and scaled back its operations inside China’s Internet firewall.

In Russia, leaders of advocacy groups and newspapers subjected to antipiracy raids said Microsoft was cooperating with the authorities because the company feared jeopardizing its business in the country. They said Microsoft needed to issue a categorical public statement disavowing these tactics and pledging to never cooperate in such cases.

Microsoft has not done that, but has promised to review its policies in Russia.

“We take the concerns that have been raised very seriously,” Kevin Kutz, director of public affairs for Microsoft, said in a statement. Mr. Kutz said the company would ensure that its lawyers had “more clearly defined responsibilities and accountabilities.”

“We have to protect our products from piracy, but we also have a commitment to respect fundamental human rights,” he said. “Microsoft antipiracy efforts are designed to honor both objectives, but we are open to feedback on what we can do to improve in that regard.”

Microsoft emphasized that it encouraged law enforcement agencies worldwide to investigate producers and suppliers of illegal software rather than consumers. Even so, it has not publicly criticized raids against small Russian advocacy groups.