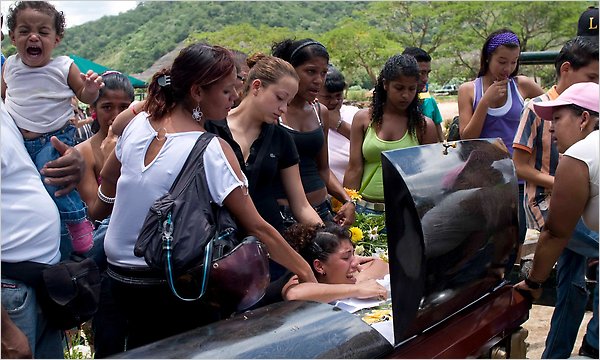 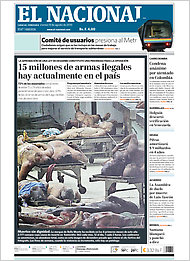 In Iraq, a country with about the same population as Venezuela, there were 4,644 civilian deaths from violence in 2009, according to Iraq Body Count; in Venezuela that year, the number of murders climbed above 16,000.

Venezuelans have absorbed such grim statistics for years. Those with means have hidden their homes behind walls and hired foreign security experts to advise them on how to avoid kidnappings and killings. And rich and poor alike have resigned themselves to living with a murder rate that the opposition says remains low on the list of the government’s priorities.

Then a front-page photograph in a leading independent newspaper — and the government’s reaction — shocked the nation, and rekindled public debate over violent crime.

The photo in the paper, El Nacional, is unquestionably gory. It shows a dozen homicide victims strewn about the city’s largest morgue, just a sample of an unusually anarchic two-day stretch in this already perilous place.

While many Venezuelans saw the picture as a sober reminder of their vulnerability and a chance to effect change, the government took a different stand.

A court ordered the paper to stop publishing images of violence, as if that would quiet growing questions about why the government — despite proclaiming a revolution that heralds socialist values — has been unable to close the dangerous gap between rich and poor and make the country’s streets safer.

“Forget the hundreds of children who die from stray bullets, or the kids who go through the horror of seeing their parents or older siblings killed before their eyes,” said Teodoro Petkoff, the editor of another newspaper here, mocking the court’s decision in a front-page editorial. “Their problem is the photograph.”

Venezuela is struggling with a decade-long surge in homicides, with about 118,541 since President Hugo Chávez took office in 1999, according to the Venezuelan Violence Observatory, a group that compiles figures based on police files. (The government has stopped publicly releasing its own detailed homicide statistics, but has not disputed the group’s numbers, and news reports citing unreleased government figures suggest human rights groups may actually be undercounting murders).

There have been 43,792 homicides in Venezuela since 2007, according to the violence observatory, compared with about 28,000 deaths from drug-related violence in Mexico since that country’s assault on cartels began in late 2006.

Caracas itself is almost unrivaled among large cities in the Americas for its homicide rate, which currently stands at around 200 per 100,000 inhabitants, according to Roberto Briceño-León, the sociologist at the Central University of Venezuela who directs the violence observatory.

That compares with recent measures of 22.7 per 100,000 people in Bogotá, Colombia’s capital, and 14 per 100,000 in São Paulo, Brazil’s largest city. As Mr. Chávez’s government often points out, Venezuela’s crime problem did not emerge overnight, and the concern over murders preceded his rise to power.

But scholars here describe the climb in homicides in the past decade as unprecedented in Venezuelan history; the number of homicides last year was more than three times higher than when Mr. Chávez was elected in 1998.

Reasons for the surge are complex and varied, experts say. While many Latin American economies are growing fast, Venezuela’s has continued to shrink. The gap between rich and poor remains wide, despite spending on anti-poverty programs, fueling resentment. Adding to that, the nation is awash in millions of illegal firearms.

Police salaries remain low, sapping motivation. And in a country with the highest inflation rate in the hemisphere, more than 30 percent a year, some officers have turned to supplementing their incomes with crimes like kidnappings.

But some crime specialists say another factor has to be considered: Mr. Chávez’s government itself. The judicial system has grown increasingly politicized, losing independent judges and aligning itself more closely with Mr. Chávez’s political movement. Many experienced state employees have had to leave public service, or even the country.

More than 90 percent of murders go unsolved, without a single arrest, Mr. Briceño-León said. But cases against Mr. Chavez’s critics — including judges, dissident generals and media executives — are increasingly common.

Henrique Capriles, the governor of Miranda, a state encompassing parts of Caracas, told reporters last week that Mr. Chávez had worsened the homicide problem by cutting money for state and city governments led by political opponents and then removing thousands of guns from their police forces after losing regional elections.

But the government says it is trying to address the problem. It recently created a security force, the Bolivarian National Police, and a new Experimental Security University where police recruits get training from advisers from Cuba and Nicaragua, two allies that have historically maintained murder rates among Latin America’s lowest.

The national police’s overriding priority, said Víctor Díaz, a senior official on the force and an administrator at the new university, is “unrestricted respect for human rights.”

“I’m not saying we’ll be weak,” he said, “but the idea is to use dialogue and dissuasion as methods of verbal control when approaching problems.”

Senior officials in Mr. Chávez’s government say the deployment of the national police, whose ranks number fewer than 2,500, has succeeded in reducing homicides in at least one violent area of Caracas where they began patrolling this year.

Still, human rights groups suggest the new policing efforts have been far too timid. Incosec, a research group here that focuses on security issues, counted 5,962 homicides in just 10 of Venezuela’s 23 states in the first half of this year.

Meanwhile, the debate over the morgue photograph published by El Nacional is intensifying, evolving into a broader discussion over the government’s efforts to clamp down on the news outlets it does not control.

The government says the photograph was meant to undermine it, not to inform the public. The authorities are also threatening an inquiry into “Rotten Town,” a video by a Venezuelan reggae singer that shows an innocent child struck down by a stray bullet. For all the government’s protests, the video has spread rapidly across the Internet since its release here this month.

Given the government’s stance in these cases, many here worry it is focusing on the messenger, not the underlying message.

Hector Olivares, 47, waited outside the morgue early one morning this month to recover the body of his son, also named Hector, 21. He said his son was at a party in the slum of El Cercado, on the outskirts of Caracas, when a gunman opened fire.

Mr. Olivares said Hector was the second son he had lost in a senseless murder, after another son was killed four years ago at the age of 22. He said he did not blame Mr. Chávez for the killings, but he pleaded with the president to make combating crime a higher priority.

“We elected him to crack down on the problems we face,” he said. “But there’s no control of criminals on the street, no control of anything.”

https://edsondepary.webnode.com/_files/200002167-79e117adb1/animated_favicon1.gif
This website was built with Webnode
You can also have an impressive website for free!
Try it out